Creation initial concept
The idea of two players being tethered to something in the middle has been circling around my head for a while, incorporated in a bunch of different ideas, from a plat-former to a first person shooter. For Brains Eden we were coming up with ideas, and as we were able to work on a tablet, I brought up the idea of two players controlling their position on their own half of the screen, with something in the middle that they needed to protect. After someone brought up a great video titled 'what if animals were round', we decided to go for really fat penguins as our protagonists.
System design, level design, balancing
Although we were making an endless runner type game, but we didn't want a fully procedural path that we had no control over. So I made around eight pieces / chunks that would semi-randomly be placed to form a path - with later pieces being more difficult and only appearing after a certain amount of time. The first time I made the pieces they were way too difficult in general, and the egg broke nearly instantly. After giving the egg a lot more space, and toning down on the difficulty, it became a lot more playable, while still becoming challenging over time.
Character modeling, texturing
I am one of the artists for Sparklepony, in addition to being a designer - so I made the model for the penguin, and textured it. It's ridiculous shape was very fun to make, and it did the job rather well in the game.
Environment texturing
One of our team members is very good with materials, and made something awesome for the ice. Sadly as unreal doesn't support a lot of things for tablets, we couldn't use it - luckily I was able to make something for that. It was still quite some work getting it to look right, but it does it's job for a gamejam. 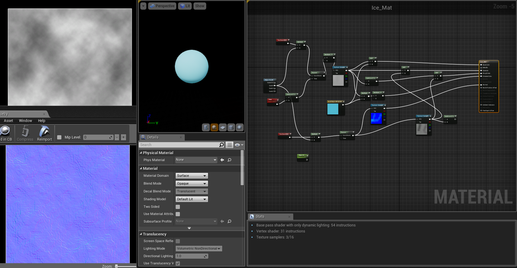 Material I made for the ice, mainly by playing with filters and the material editor in unreal
Aangestuurd door